Surprise, surprise! Guess whose favorite thejerk is back with the best pound for pound photo commentary this side of the Rio Grande (it's incredibly difficult to beat the Mexicans on comments to weight ratio these days, what, with NAFTA and all). And for the last time, no, I'm not dead! If that particularly virulent strain of gonorrhea didn't get me, little else will, so strap in for the long haul because I'll be around for some time to come.

Although I've been off the radar for some time, I've still been traveling but concentrating the majority of my massive talents & muscularity to my other website. Nonetheless, I'll half-ass this site until I can drive it permanently into the ground and offend the greater internet viewing population or die trying. Until then, enjoy the following photos I took with my inferior point and shoot camera (Canon SD1000) earlier this year.

Although I usually prefer to write on subject matter that involves humiliation and degradation, I couldn't help resist posting this disgustingly cute puppy video.

With a head that size, no matter what animal you are, you're bound to be adorable. But more importantly, with a head this big, you're unable to right yourself from a fallen position.

So what's more important to you? Being adorable or the ability to stand upright after a fall? There are no right or wrong answers... except in this case. The right answer is to be adorable... then someone will help you after you've fallen. If you're ugly, no one will come within a few feet of you.

Break In Case of Emergency 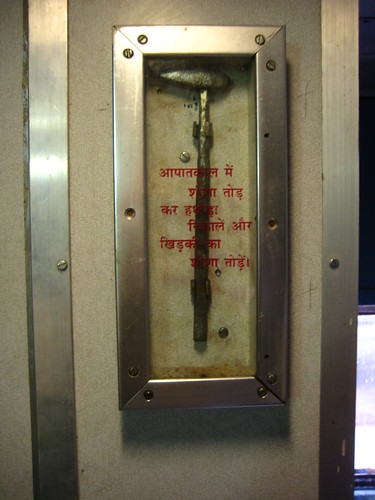 hit the jump for the answer

If you've donated any clothes, they might end up here: 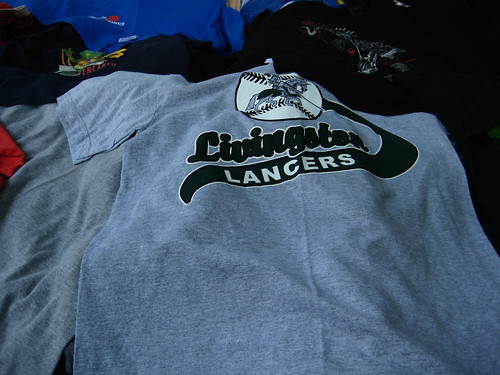 Strangely enough, the shirt is for the Livingston Lancers, my neighboring town's high school, half a globe away. Surely one of those upper middle class mothers sent this donation in to assuage her guilt at living an wasteful and unsustainable lifestyle. The town's full of rich people, you see. Joke's on her though... someone's hijacked the donated shipment to make a quick profit and the rich mom's karma is unaffected because the shirt didn't end up on the back of the needy.

Lose-lose, all around! (except for the unscrupulous hijacker. he gets off pretty well at the end of the day)

On the 1 month anniversary of my quitting smoking, I present to you one of the lesser known brands of cigarettes in India: 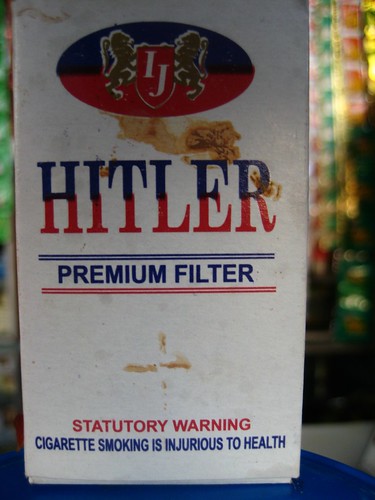 The Dalai Lama's a shifty one.

I arrived to Dharamsala with little hope of seeing His Holiness. Already this year, he abruptly canceled his annual March teachings due to poor health & probable international engagements with Richard Gere. With a busy schedule of whipping around the world or bopping around to various parts of India, the D.L. calls the Hyatt as much home as his modest mountain palace in Dharamsala. One wonders the kind of frequent flier miles His Holiness racks up and whether he claims these all-expenses-paid trips on his income taxes. I would safely assume that he, like the rest of us, cooks the books a pinch.

To counter mother nature's cruelly cursing me with unadulterated man-boobs, lady luck bestowed upon me a once in a lifetime chance at a face to face encounter with the Nobel laureate himself! He happened to be in town for a few days to give a talk to the Tibetan students in the area. Something about the 37 somethings of the Bodhisattvas... Who cares!? I was going to see the Tibetan rebel numero uno in the flesh!

My attempt to obtain tickets for indoor seating for the 2 day event were rebuffed so instead I did what any devoted Buddhist would do: relentlessly stalk him at the place his motorcade & entourage (including bodyguards, handlers, sycophants, well-wishers, et.al.) would deposit him. 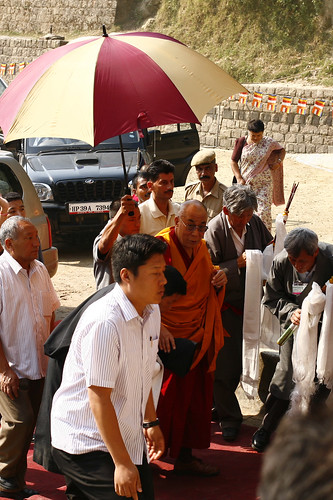 Mission accomplished. And to boot, I nearly touched him, before a bodyguard swiftly deflected my clammy open palm out of His Holiness' middle path.

In my absence, I've kept myself rather busy scouring the ol' ISH (information super-highway) to bring you godless heathens more and more educational and/or rewarding content. As of 11:21pm last night, I reached the end of the internet and I'm ready to begin posting my findings. (In case you were wondering, no, I wasn't at all being lazy and neglecting this site in favor of my photolicious new website: Daily Travel Photos.)

mo' after the jump